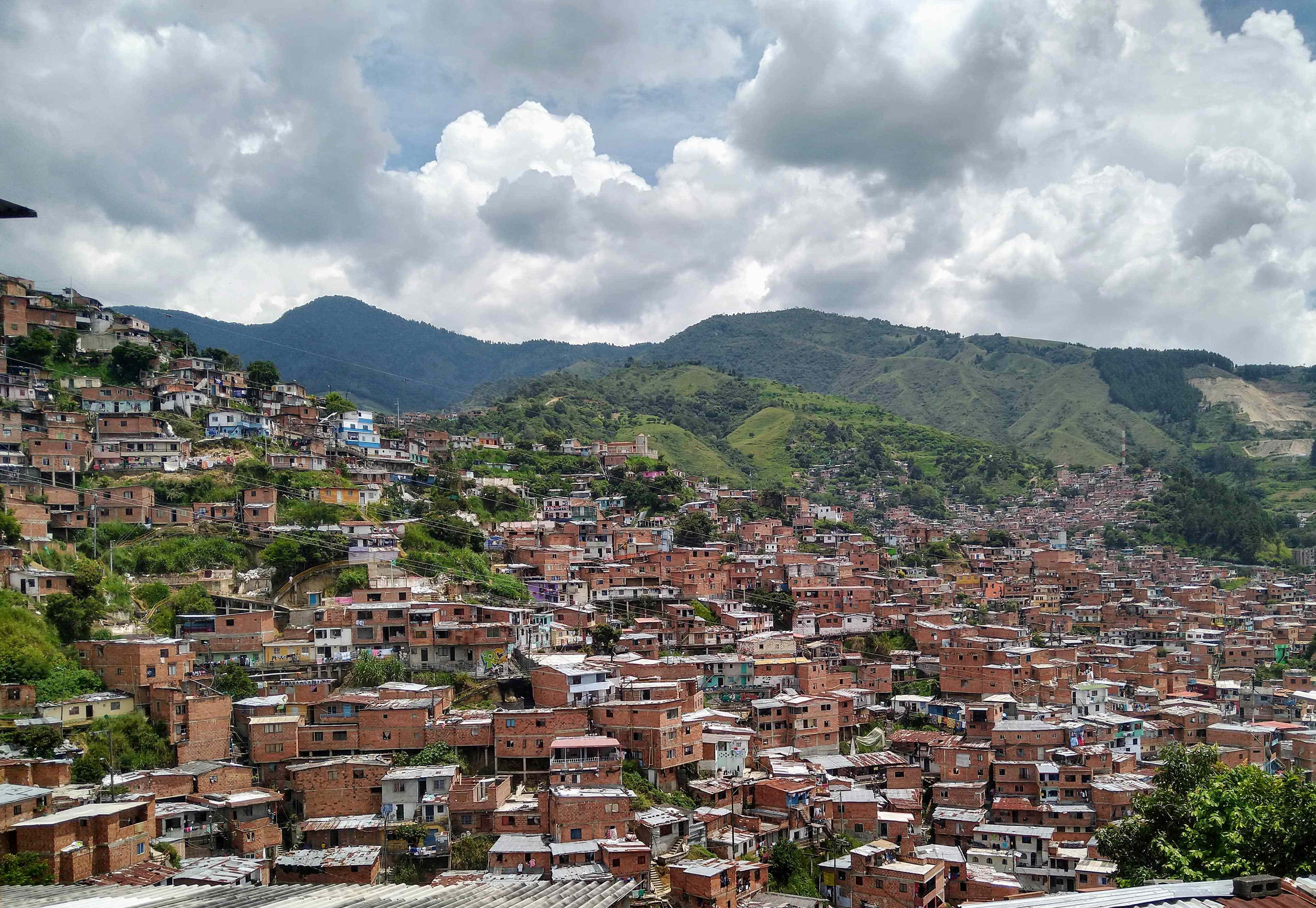 What do you think of when you hear Medellin, Columbia mentioned?  We all know the connotations associated with the city and when I have told people I’m starting FireTreks here it’s more often  than  not met with wide – eyed responses  of:  ‘Is it safe?’ ,  ‘Are you sure?’  or ‘Be careful!’

I always have nerves before I leave for a big solo trip – but this is generally to do with logistics and my almost impressive ability to lose my passport/credit cards/marbles…but very rarely is  the  safety of  the destination  a big concern simply because I do not trust anyone to tell me how I’m going to feel in a new location.

Medellin is no different.  The stress melted from my shoulders as I stepped off the plane and I was blown away by the friendly and helpful nature of everyone I met whilst navigating the bus and metro system.  This is a common theme with the Paisa people who are some of the loveliest I’ve met through all of my travels so far.

During a walking tour through the downtown area I began to understand a little more of the history.  Medellin is a city still in recovery – its violent past is incredibly recent and sits raw in the memories of most people above the age of 30.   My guide insisted on using the alias ‘Voldemort’ instead of  Escobar, simply because uttering his name often still evokes anger in some of the local people.  They do not want his legacy to become a tourist attraction.    So, out of respect, I will not mention him anymore.  What I will discuss is the legacy of this time – how does a recovering city deal with the enforcement of fire safety measures and new regulations when its people have had such a complicated history with authority.

FireTreks’ first port of call was with Diego Moreno, the Chief of Fire in Medellin and Deputy Director of Risk Management, who showed me round the local fire station and explained the complexities of fire safety in Medellin.  He has been a fire fighter since 1996 and Fire Chief for the last 4 years.

He explained that Medellin has 8 fire stations around the city and 270 – 300 employed fire fighters rather than volunteers, which can be fairly unusual across South America and other parts of Colombia where more often there is a reliance on volunteers to make up the workforce. The Central Fire Station in Guayabal is the largest in Medellin and includes a training facility which is currently training 4 engineers and 10 fire fighters.

Diego’s colleague, David Esaú, took me to see some of the facilities around the town including specialist HAZMAT sites, rope rescue, sub-aquatic response and the 123 call centre which is a hub for emergency service response.  This service is relatively new but is proving invaluable in reducing response times and improving services around the city.

It’s hard not to become excited about the work that’s being carried out considering the pride and passion everyone has for what they do, the facilities and the teams.    Diego explained that Medellin is a unique city and a lot of his work centres on creating a culture of fire safety specific to the needs of the environment and people.

“For many years we were trying to use the American model for fire safety but it was unrealistic to apply it to a city as unique as Medellin, particularly in the poorer areas.”

He continued to give examples from an infrastructure viewpoint –

“Our road network is good but with the large American fire trucks it can often be impossible to use in some of our narrow streets.”

This is coupled with the hydrant network which often does not have sufficient flow rates to support typical fire requirements.  As such, Diego is trying to utilise more suitable regulations, drawing from other countries around the world.  It’s a mammoth task and to make perfect would require significant investment. Therefore, over the years, steps are being taken to move the city forward whenever possible to help improve fire safety.

During violent times, thousands of villagers were displaced from areas surrounding Medellin, which brought a large number of new residents, most of whom came with nothing.  Illegal houses were built using whatever materials could be gathered and communities were established on the outskirts of town on the surrounding hillsides.  This effectively created a significant fire risk.

There was no official infrastructure, homes were built precariously above homes.  The government initially attempted to clear the housing but people continued to rebuild and eventually the buildings were allowed to stay with minor utilities being provided.

The most infamous of these communities is known as Comuna 13 which for many years was considered to be the most dangerous in the world.  A no – go area for all emergency services, it was a hot bed of gangs and militias, the murder rate was higher than anywhere else in the world up until as recently as 2010.

I decided to visit the community to see what it is like now.

The scale is particularly noticeable, whilst ascending the hills and you can see how vast and compacted the housing is.  It is understandable that retrospectively applying standards would be particularly daunting for so huge an area.

In 2010, the Seismic Resistance Construction Regulations were updated (to form Regulation NSR-10) to include chapters on Fire Protection (J) and Human Safety (K).  These chapters draw on NFPA 101 and were to be applied to new builds in the city.  There is no retrospective enforcement of this code for existing buildings here but I was shown a number of structural reinforcement measures that had been introduced to help against the threat of earthquakes.  I am hoping to learn of the regulations as I continue my journey across Colombia.

Medellin has a wonderful ability of turning some horrific negatives into defiant positives and the hillside community of Comuna 13 is a shining example of this. The youth of the area transformed it into a hub of art, music and dance. The stunning graffiti, occupying every available wall, tells a story, often of the violence and suffering of the past, and it really is a sight to see.  It’s incredible that the young people here have created a bedrock of regeneration which others can benefit from.  This regeneration is bringing in money, improving infrastructure and helping to create a more forward-thinking environment. 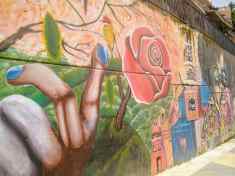 I do not know the answers to solving all the fire safety issues here.  There’s advice that could be given regarding mitigation, strategies and procedures could be put in place but, in my opinion, the youth could be a gateway to change since they have done such a wonderful job so far. Perhaps education in the basics of fire safety and introducing the concept of risk assessment may stem some of the issues the city faces in the future since the most common fires in Medellin occur in the home, caused by open flame candles or electrical faults.

However, during a ride along through the city with Diego, I was shown areas where even now illegal housing is still being built, often teetering on the sides of steep hills and even on river banks which often flood.  He explained that people were still migrating to the city to make better lives for themselves and it was a daily battle to ensure that the codes introduced in 2010 were being enforced given the resources available.

Diego introduced me to Juan David Perez who is a Mass Influx Event Coordinator and we discussed the work that goes into planning large scale events in the city.

The week previous to this, I had attended a football match at the Atanasio Girardot Stadium to watch Medellin’s Atlético Nacional play Tolima in the Colombian league.  I’ve never experienced anything like it before!  It was comparable only to the mosh pits of North London rock clubs – the crowd did not falter in singing even when conceding goals and stampeded from the tops of the stand to the bottom when a goal was scored.  I have worked on stadiums previously, including the mighty White Hart Lane and I was at a loss as to how you implement any sort of safety measures in the face of such chaos – little did I know I would soon be deciphering that answer the following week.

Juan took me through the history of the stadium, and said that much like the hillside communities, a number of stands were not accessible to any emergency services.  Even now, the South stand is only accessible by certain teams during the Atlético matches – with most issues dealt with post-match.

He told me that previously if there had been an injury in the upper tier, that the casualty would be thrown off the edge by the crowd before being carried out to emergency services.  My jaw hit the floor…. I could not even comprehend this!

It was also sometimes the case that when the team lost, confetti was gathered together and a fire started in protest.  This coupled with a lack of handrails and barriers along with a complete lack of authority created a safety nightmare.

A solution had to be found that would both work alongside societal norms and allow for greater safety standards to be introduced.  Juan said that introducing barriers and handrails was not received well.  Gang members would often stand on the rails in a show of power which had inevitable consequences.

Instead a risk-based approach was adopted – all events need risk management accreditation before they can take place which includes rules, counter-measures, maps, evacuation plans, media strategy and audio information.  Sweeps of the stadium were provided to ensure egress routes were clear and sufficient safety measures in place. New laws were enforced to allow prosecution of trouble makers with 360degree CCTV cameras and facial recognition software provided to help identify them.  Structural reinforcement was provided to deal with the consistent jumping and dancing in the stands.

These measures have drastically improved conditions in the stadium and other event locations without significantly disrupting the social status quo, which has lead to an increase in outside events being brought to Medellin including concerts with Beyonce, Guns and Roses and large events such as the BMX championships.

Medellin does not claim to be perfect – what city does?  After some areas being left for so long with a lack of authority it’s no wonder there is a reluctance to change, but the culture of facing issues head on and turning negatives into positives is, nevertheless, reflected everywhere. Which is why I reiterate the belief that education is key.

More examples of this defiant attitude are:

This attitude is reflected in the way fire safety is being approached.  It will be a slow process but with passionate people like Diego, Juan and David who are willing to enforce change and work to the city’s strengths and with the city’s weaknesses, I have a lot of hope for the future of fire safety in Medellin.

FireTreks wishlist for the year

All fired up – The Journey so far